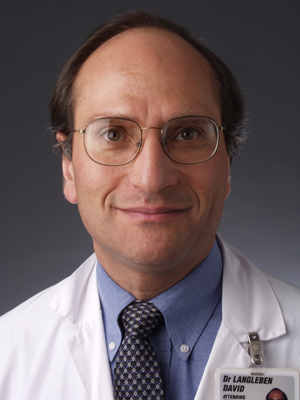 Dr. David Langleben is a Professor of Medicine at McGill University. He is the Director of the Cardiology Division of the Jewish General Hospital, and founded and directs the Centre for Pulmonary Vascular Disease, an internationally recognized resource for patient care, teaching, and research. He is a Project Director at the Lady Davis Institute for Medical Research.

Dr. Langleben’s research focuses on the vascular biology of pulmonary hypertension. He has studied endothelial dysfunction in the disorder, at the cellular, organ, and whole-body level. He and his colleagues were the first to identify endothelin-1 as a mediator in pulmonary hypertension. Over the following 20 years, this discovery led to the development of several approved therapies that have benefitted thousands of patients. His group has gone on to study the clearance of endothelin-1 in pulmonary hypertension and to examine mechanisms that control its synthesis. Recent work has focused on the effects of bone morphogenic proteins and other members of the transforming growth factor-β family of molecules on the control of endothelin-1 production.

Another major focus has been to measure the degree of loss of lung microvessels in pulmonary hypertension and to assess its impact on prognosis, response to therapy, and exercise capacity. With his colleagues, he has adapted for human use techniques originally developed for animal experiments. These human studies have provided definitive assessments of the restricted pulmonary bed in pulmonary hypertension and have provided the first mechanistic insights for the physiologic abnormalities in the disease. Current studies are examining changes in vascular surface area in response to vasodilators, and studies in exercising patients will begin shortly.

At the Centre for Pulmonary Vascular Disease, Dr. Langleben is the principal investigator in many clinical trials of novel therapies for pulmonary hypertension. He sits on several scientific advisory boards that design and direct major international clinical trials.

– Measuring pulmonary vascular surface area in pulmonary hypertension and studying the effects of exercise and medications.

About Scleroderma Association of B.C. Media Room Contact Us
Become a member
and receive The
Bulletin
CLICK HERE